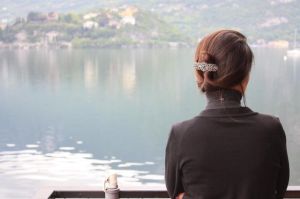 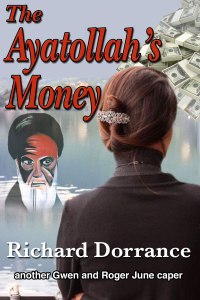 Lahleh hovered the mouse pointer over the Send button, and felt fear.  She knew this decision was the most serious of her thirty-five years on earth, and she debated if she should do this, or not  She had devoted much of her energy and intelligence over the last ten years preparing for this moment, and now it was here.  If she hit the Send button, her life would change dramatically.  If she didn’t, it would remain the same.  She wasn’t sure if it would change for the better or the worse, but she knew it would change.

She closed her eyes, stopped her thinking, and let her intuition come to the front.  It didn’t take long to speak to her, and when it did, she trusted it.  Her finger descended to the mouse button and clicked.  The pointer on the screen changed shape, the computer received the signal, and at the speed of light it transmitted a data pulse through the internet to the Central Bank of Tehran.  There !  It was done.  Her life now was different.  No longer was she Iranian, but was something and someone different.  She didn’t know what or who, but she was ready for the transformation.

She manipulated the mouse again, logging off and powering down the computer.  She unplugged it, put it in a case, and carried it to the door of her apartment.  She went to her bedroom, lifted a duffel bag onto the bed, filled it, not very carefully, with an assortment of clothes and personal items, and carried it to the front door, where she set it next to the computer.  She picked her passport, visa, and wallet off the kitchen table and put them in her backpack, along with a bottle of water.  That was all.  She carried these outside and down the block to the corner, where she boarded a bus for the airport.  An hour later she sat at a gate and watched the monitor, wondering why she wasn’t nervous.  The monitor said the flight to Cairo would depart in forty-five minutes, which was about forty minutes later than she wanted, but she felt good, nonetheless.  She knew the flight from Cairo to London would leave three hours after her arrival in Cairo, and she knew she would get to London two hours after that.  That was the end of what she knew.  Everything after her arrival in London was unknown, and that suited her fine; she would figure out her new life as it unfurled.  She was flying, literally and figuratively, flying high.  The question was, would she get shot down

The computer at the Bank of Tehran remained non-judgmental.  It received the signal from Lahleh’s computer and acted on it.  It processed all the bits of information in the signal, compared them to directives stored in its memory, and said, OK, all is as it should be.  In the blink of an eye, the computer transferred $100 million dollars from one account to another account.  It did so by communicating with a computer in Syria, which communicated with a computer in Russia, which communicated with a computer on a small island in the Caribbean.  The computer in the Bank of Tehran was the big dog on the block, the alpha, and the other computers downstream did what it told them to do, which was to transfer the money.  The money didn’t have to travel very far, because the receptor account was in the same bank as the donor account.  When Lahleh had found the location of The Ayatollah’s secret account, she decided the bank where it resided was as good a place as any for her to establish her new account.  She figured it was secure, knowing the weak link in the chain, the vulnerability, was not in the Caribbean bank, but in the programming of the computer in the Bank of Tehran.  The alpha computer was big, but it also was dumb, which is why the $100 mill went into an account just down the street, figuratively speaking, from The Ayatollah’s account.  And it all happened quickly.  In fact, Lahleh was worth $100 mill before she even got on the bus which took her to the airport, a fact that made her feel warm inside.  It’s true, the warmth was mixed with fear, but warm fear is better than cold fear.

The Ayatollah’s money actually sat in the bank in the Caribbean, but he had left a link to it in the Bank of Tehran.  When he looked at his computer to check on his money, which wasn’t very often, he looked at a page on the Bank of Tehran website, which looked at a page on the website of the Caribbean bank.  He felt good seeing that figure on the screen, $100,000,000, knowing it was his retirement fund if ever he was deposed by a rival, or by the Iranian citizenry who had gotten tired of his religious zealotry.  He probably shouldn’t have left the link to the Bank of Tehran, because Lahleh is very good with computers, and that was how she had found his secret account.  Lahleh didn’t know how long she had before he discovered the theft, because she didn’t know how often he looked at the account on the computer.  Maybe it was every day, or maybe it was once a month, but because she didn’t know, she figured she’d better get her ass out of town pronto, which she was doing.

Back at the Tehran bank, the computer sat calmly and quietly, staring at the big goose egg in the account in the sibling bank in the Caribbean.  It had no instructions to alert anyone in the event of a significant withdrawal, not even a total withdrawal, which is what it just had executed.  $100 mill in the account, or nothing, it was all the same to the computer.  It had done its job, and done it well, and now it rested on its laurels.  Another day, another dollar.